Due to the resignation of former State Senator Dan Squadron, effective on August 11th, the Democratic Party will convene a meeting of the 26th Senate District Committee to select the Party’s nominee for the November 7th General Election. Any individual interested in seeking the Party’s nomination for the position of State Senator from the 26th District, New York and King’s Counties, should email the New York County Democratic Committee at manhattandems@gmail.com for more information.

The New York County Democratic Committee is proud to salute Assembly Member Herman “Denny” Farrell, upon his resignation, from 43 years of service  to the people of the State of New York and our great Nation. Due to his resignation, effective on September 5th, the Democratic Party will convene a meeting of the 71st Assembly District Committee to select the Party’s nominee for the November 7th General Election. Any individual interested in seeking the Party’s nomination for the position of Member of Assembly from the 71st District, New York County, should email the New York County Democratic Committee at manhattandems@gmail.com for more information.

The New York County Democratic Committee is pleased to announce the formation of an Independent Screening Panel to report on candidates for nomination by the Democratic Party for five vacancies on the New York State Supreme Court vacancies, 1st Judicial District (New York County), which will be filled in the November 8, 2017 general election. The panel has received an unprecedented 32 designees from participating bar associations, law schools, and community groups, demonstrating the extensive outreach on behalf the Manhattan Democratic Party to the legal community and the vitality of the civil society surrounding the judiciary here in Manhattan. The panelists will review applicants to the Supreme Court and report out those candidates they deem to be most qualified for election to the Supreme Court. The designees and their designating organizations are as follows:

The Demmys is Manhattan’s premier Democratic event to honor those New Yorkers who make our city, our state and our nation great.

For more information and to purchase tickets online CLICK HERE

Have questions? Need help? Email us at thedemmys@gmail.com.

Would you like to see your club win a Demmy this year? Go for it! Send us your nomination at thedemmys@gmail.com with “club of the year” in the subject line.

The nominating process closes on July 6th at 12PM. Don’t delay send in your nominations today!

On May 17, 2017 the New York County Democratic Committee Executive Board met to vote on endorsements for city-wide and county-wide elections. Below is the list of endorsed candidates. You can see the full minutes of the meeting here.

On May 2, 2017, the Independent Judicial Screening Panel for Civil Court reported the following candidates as most highly qualified for two (2) county-wide Civil Court vacancies and a single vacancies in the 5th and 9th Civil Court District:

Thank you to the panel and its administrator for their diligent work.

Welcome to the New York County Democratic Committee website! Here you’ll find important information regarding upcoming events, relevant news and photos, and information about how to get involved.

New York County is the most historic and important democratic region in America. Each day we carry the banner for progress while fighting to make our borough one of inclusivity and pride. We are elated to welcome you to that fight.

Democrats believe that all people deserve the ability to pursue their dreams and fulfill their potential. We fiercely protect and promote access to opportunity for all New Yorkers, and we believe in lending a hand when necessary and unifying to meet our community’s collective challenges.

For each empty seat on the court, the panel recommends between two and three candidates from all the available applicants. In the case of a Civil Court vacancy, the District Leaders, elected by Democratic voters in the Primary, vote to endorse one candidate who will gain support throughout entire the borough. In the case of the Supreme Court vacancy, the Judicial Delegates, also elected by Democratic voters in the Primary, then vote for the Democratic nominee from among the qualified candidates at a judicial convention.

The organizations which sent panelists for 2017 are:

On March 11, 2017 the members of the New York County Democratic Committee in the 30th Senate District met to elect a Democratic candidate for the Special Election in the 30th SD. Want to join the Committee? Manhattan Young Democrats helps people of all ages get involved.

Below are the minutes of the event and the submitted nomination form declaring Brian Benjamin the Democratic candidate for the 30th SD Special Election.

You can also watch the full livestream of the event. 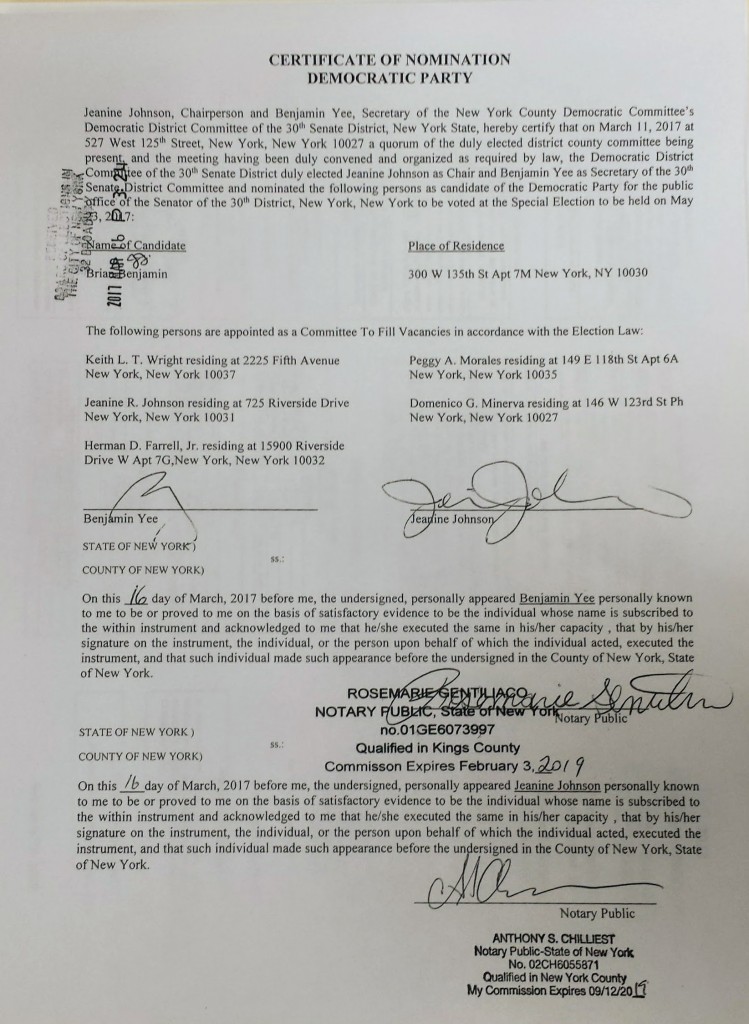 which will be filled in the November general election. The heads of numerous bar associations, community’s organizations and law schools have been invited to nominate members of the panel, which will be directed to report a total of no more than the nine most highly qualified candidates for the three (3) Civil Court vacancies.

Candidates for the Court may obtain applications, via email, from the administrator of the panel:

Questions concerning this year’s panel should be directed to the Panel Administrator, or the New York County Democratic Committee office at (212) 687-6540.

The deadline for submitting completed Civil Court applications is Friday, March 10, 2017 at 5PM.