“As the County Committee of the Manhattan Democratic Party, you all are the eyes and ears across the borough. You know the issues that are most important to the diverse communities you represent; and, as such, you are closer to the solutions,” said County Leader Keith L.T. Wright. “Our party is stronger for your engagement — and in case no one else does, allow me to Thank You immensely for your service to the Party, our County, and the great State of New York.”

The meeting, which took place at Denny Farrell Riverbank State Park, opened with remarks by County Leader Keith L.T. Wright, Lieutenant Governor Antonio Delgado, and announcements by District Leaders Kim Moscaritolo and Jennifer Hoppe about ways Democrats across the borough can get engaged in this year’s critical elections.

After a series of nominations and votes, the duly-elected and appointed Members of the County Committee voted to fill hundreds of vacancies across the borough, and elected the following individuals to serve on County Committee leadership:

Additionally, in light of the Gender Inclusive Ballot Act recently signed into law by Governor Kathy Hochul, the County Committee voted to establish rules that allow for individuals who do not exclusively identify as a binary gender to serve as District Leaders. At a time when Republicans in New York and across the nation are seeking to roll back LGBTQ rights, the Manhattan Democrats are proud to lead the effort to increase rights and protections for all Democrats in Manhattan, and encourage democratic engagement that does not intentionally or effectively disenfranchise any residents. On behalf of County Leader Keith L.T. Wright, Chairman Domenico Minerva, and the entire Manhattan Democratic Party, we are thankful for the hard work of the Rules Committee and the leaders who brought this law and rule-change to fruition:

In order to select a Democratic Nominee for the General Election to be held on November 8, 2022, the 3rd Municipal Court District Committee held a meeting on Thursday, August 18, 2022 in Chelsea.

The Manhattan Democratic Party is proud to support the selection by the 3rd Municipal Court District Committee of L. Austin D’Souza as their Democratic Nominee for Civil Court. In a strong show of support, the quorum of County Committee Members called for a voice vote and unanimously nominated D’Souza. We congratulate Civil Court Democratic Nominee L. Austin D’Souza and thank each County Committee Member, District Leader, and member of the public who engaged in the meeting.

As per the declination of Democratic Civil Court Nominee Lisa Sokoloff due to her acceptance of a Supreme Court nomination, a vacancy exists in the office of Civil Court Judge of the State of New York from the 3rd Municipal Court District in New York County.

In order to select a Democratic Nominee for the General Election to be held on Tuesday, November 8, 2022, the Manhattan Democratic Party will hold a nominating meeting of the 3rd Municipal Court District Committee on Thursday, August 18, 2022 at 6:15pm. All interested candidates are invited to participate.

Over 300 Democrats and guests gathered at the beautiful Cathedral Church of St. John the Divine to consider the large, diverse group of highly-qualified candidates who have been reported out of independent judicial screening panels. After all voices were heard in a show of transparent democracy, the following candidates were selected as the 2022 Democratic Nominees for the 1st Judicial District election to be held on November 8th:

On July 18, 2022, the Supreme Court Independent Screening Panel concluded its deliberations by reporting out as most highly qualified the following candidates:

The screening panel, administered by Michael Weiner, extensively reviewed the background and experience of a number of applicants and determined these well-deserved candidates would be most qualified to vie for three (3) open positions on the Supreme Court, to be filled at the general election set for November 8, 2022.

On behalf of the Manhattan Democratic Party, County Leader Keith L.T. Wright and Judiciary Co-Chairs Curtis Arluck and Louise Dankberg, we sincerely thank the panel and its administrator for their diligent work and congratulate tonight’s applicants who join the following candidates reported out of previous panels:

June 1, 2022
The New York County Democratic Committee has announced the formation of an Independent Screening Panel to report on the qualifications of candidates seeking the nomination of the Democratic Party for three (3) vacancies on the New York State Supreme Court to be elected in the November 2022 general election. The heads of numerous bar associations, community organizations and law schools have been invited to nominate members of the panel, which will be directed to report a total of no more than the nine (9) most highly qualified candidates for the three vacancies.

Candidates for the nomination may obtain applications from Kyle H. Ishmael, Esq., Executive Director for the New York County Democratic Committee, via email at manhattandems@gmail.com.
The deadline for submitting completed applications is Monday, June 13, 2022 at 3:00 PM.

On the evening of February 15, 2022, the Independent Judicial Screening Panel for Civil & Surrogate Court reported the following candidates as most highly qualified:

On behalf of the Manhattan Democratic Party, County Leader Keith L.T. Wright and Judiciary Co-Chairs Curtis Arluck and Louise Dankberg, we sincerely thank the panel and its administrator for their diligent work–and we congratulate the candidates. 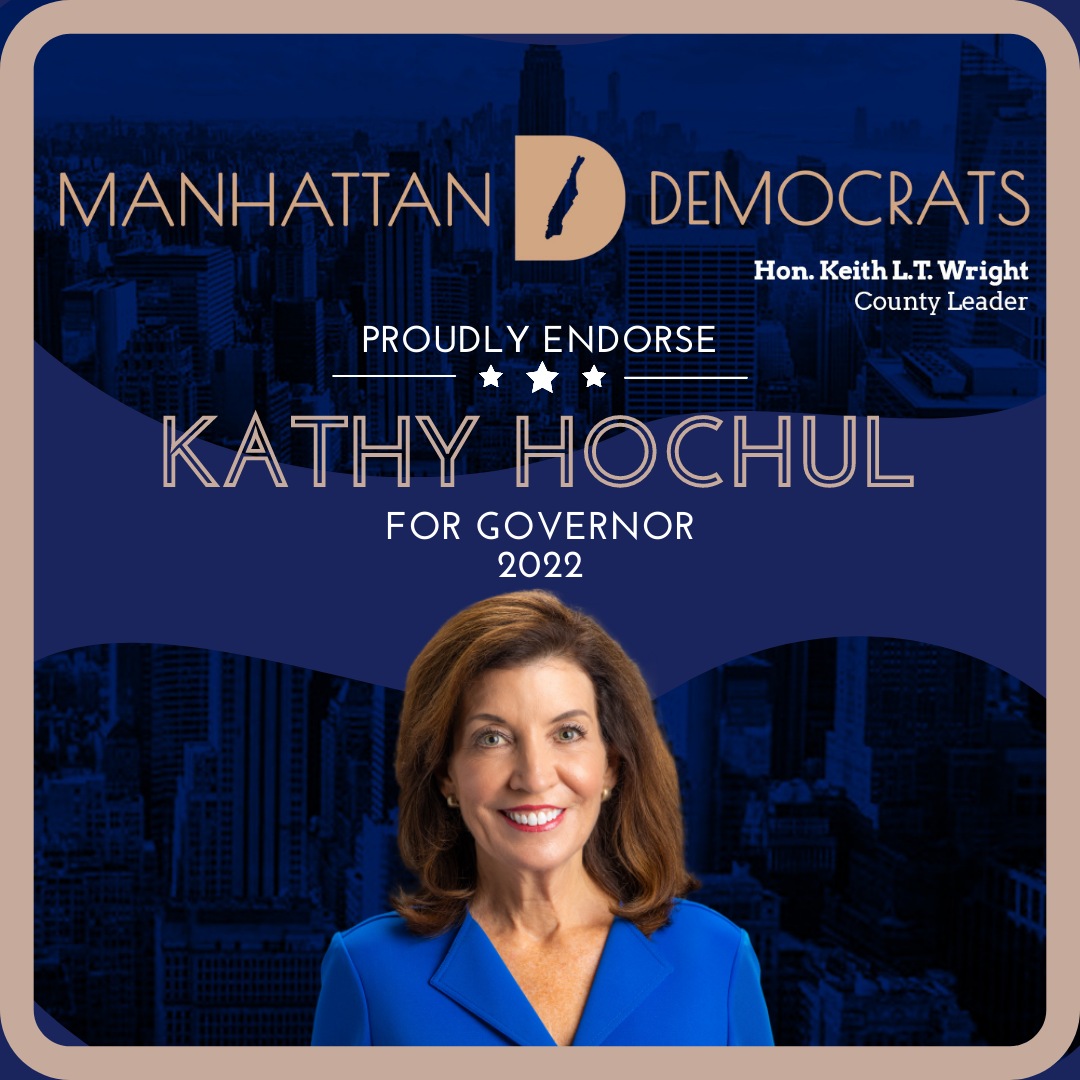 After meeting with gubernatorial candidates Kathy Hochul, Jumaane Williams, and Tom Suozzi, the Executive Committee of the Manhattan Democratic Party voted today to endorse Governor Kathy Hochul to a full term as Governor of the Great State of New York in the 2022 Democratic Primary. “Governor Kathy Hochul has a long history of building relationships in New York County,” said County Leader Keith L.T. Wright. “Kathy Hochul’s ability to speak to the range of issues of interest to the diverse executive committee of the Manhattan Democratic Party speaks to her leadership and we could not be prouder to endorse her as Governor.”

“I’m honored to be endorsed by the Manhattan Democrats who represent the core values of our party and are firmly committed to advancing opportunity for all,” said Governor Kathy Hochul. “Their grassroots organizing across Manhattan has helped expand and strengthen our party, and I look forward to working together to ensure Democratic victories up and down the ticket this year.”

The New York State Democratic Committee will meet on February 16th and 17th to endorse its nominee. A primary election is slated to be held on June 28, 2022; and the general election is expected to occur on November 8, 2022.

In order to select a Democratic Nominee for the Special Election to be held on February 15, 2022, the 72nd Assembly District Committee held a meeting on Saturday, January 15, 2022 in Washington Heights.

As per the January 6, 2022 proclamation issued by Governor Kathy Hochul, a vacancy exists in the office of the Member of the Assembly of the State of New York from the seventy-second Assembly District in New York County, caused by the resignation of Carmen De La Rosa.

In order to select a Democratic Nominee for the Special Election to be held on Tuesday, February 15, 2022, the Manhattan Democratic Party will hold a nominating meeting of the 72nd Assembly District Committee on Saturday, January 15, 2022 at 10:00am. All interested candidates are invited to participate.