The New York County Democratic Committee has announced the formation
of an Independent Screening Panel to report on candidates for nomination by the Democratic Party for one (1) New York County-wide Civil Court vacancy, which will be filled in the November general election. The heads of numerous bar associations, community’s organizations and law schools have been invited to nominate members of the panel, which will be directed to report a total of no more than the three most highly qualified candidates for the Civil Court vacancy.

Candidates for the Courts may obtain applications, via mail, from the Judiciary Committee of the New York County Democratic Committee, 108 W. 39th Street, New York NY 10018 or by email: manhattandems@gmail.com. Questions concerning this year’s panel should be directed to Ms. Cathleen McCadden, the Interim Executive Director of the New York County Democratic Committee office at (212) 687-6540.  The applications should be submitted no sooner and no later than January 27th, 2014 between the hours of 8am and 2pm. 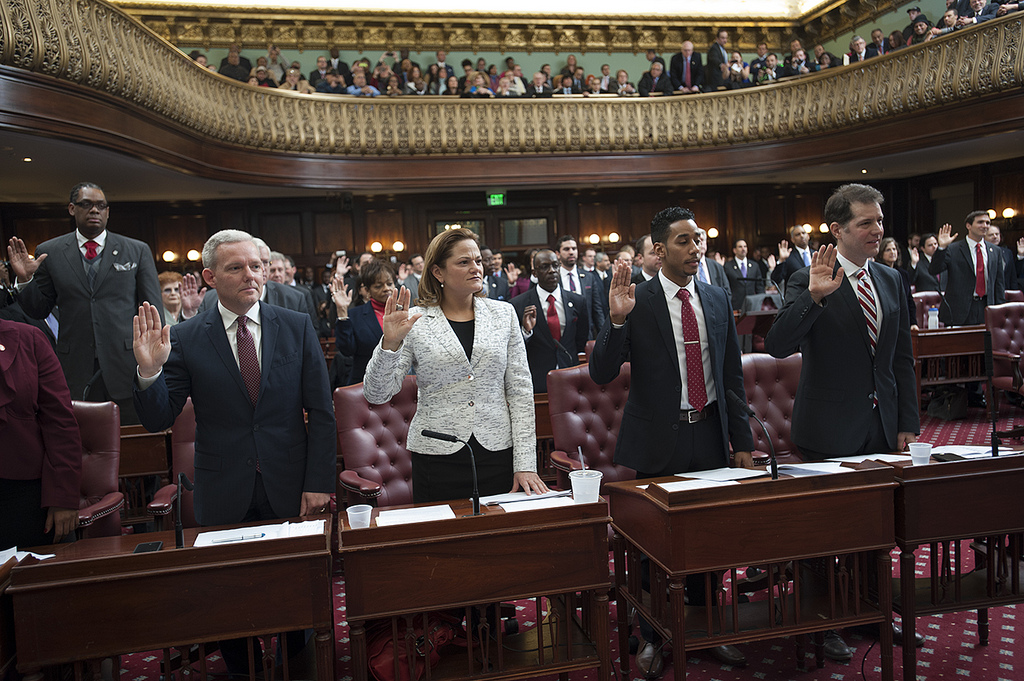 I am pleased to congratulate my friend and local colleague, the new Speaker of the New York City Council, Melissa Mark-Viverito, on her historic win today. New York County has once again proven that it is at the forefront in cultivating dynamic leaders that bridge communities across the entire city.

I am sure that Speaker Mark-Viverito will lead the City Council in an independent and fearless way. Her stewardship will reflect the principles of fairness and reform that are the hallmark of New York County. Our new Speaker will undoubtedly face many challenges, but her ability to make decisions based upon a total landscape and to push past special and singular interests will be of collective benefit to us all.

I would also like to commend Councilman Daniel Garodnick, who was an exemplary statesman in his withdrawal from consideration. I could not be more proud of New York County’s legislators than I am today. They have shown the entire city that New York County is willing and able to continue carrying the mantle of progressive leadership in the greatest city in this nation.

WHO:
You & the Manhattan Democratic Party

WHAT:
A community event and great excuse to start of the year celebrating with fellow Democrats! 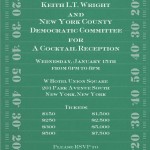 As an organization dedicated to enhancing the democratic process, the Executive Committee of the New York County Democratic Committee would like to express its displeasure with your most recent commercial and refute the claims made therein. Our mission is to help elect candidates who share our progressive views and ideals, but we also strive to increase the electorate. Every political season, the District Leaders in New York County talk to eligible voters and many are apathetic and turned off by the dirty tactics candidates use to disparage their opponents. In a City of more than eight million people, it is rather telling that only seven hundred thousand New Yorkers cast a ballot in this year’s Primary Election.  The next Mayor will face incredible challenges and the voters deserve a vigorous debate on the City’s most pressing issues.

Instead, this commercial distorts Mr. de Blasio’s positions on crime and it preys on people’s darkest fears and prejudices. It is very reminiscent of the Willie Horton ad used by the George Bush campaign during the 1988 Presidential Election. The images chosen elicit memories of a tense and difficult time in the City’s history but as you know, New York is the safest big city in the world. We’ve come a long way but there are still inequities in our approach to policing and Mr. de Blasio cannot ignore the impact “Stop, Question, and Frisk” has on communities of color. It is indeed possible to protect and preserve personal liberties while keeping the City safe.

You have a formidable professional resume and a strong base of support in the City’s Republican Party. It is unwise and unnecessary for you to resort to tactics used by your counterparts in Washington. I ask that you cease running the ad and issue an apology for the offensive images and conclusions expressed in the commercial. The New York County Democratic Committee supports Democrats exclusively but we are dedicated to expanding the electorate and making sure all New Yorkers have a voice in the political process. Commercials like yours do not help this cause and actually exacerbate voter apathy.

On Thursday, September 16th, we held our Annual Meeting of the County Committee for 2013 in Chelsea. I want to thank all of the district leaders and the active members of the party for recruiting and filling a large number of vacancies throughout the County. We emerged from the meeting stronger than ever, and I look forward to working with the District Leaders to mobilize the County Committee’s support of grassroots Democratic efforts.

During this meeting, members of the County Committee selected the following officers:

I am honored and humbled that you voted to re-elect me as the County Leader at the September 2013 Executive Committee meeting. Please know how excited I am to serve you again, and how ready I am for any challenges ahead. New York County sets the standard for excellence. I ask for your support as I do my best to promote progressive values and to engage voters all across the borough.

Further congratulations to the newly elected officers of the Executive committee. The officers are:

This election season has been quite dynamic; from the sensationalism of the Mayoral race to the hard fought victories garnered by our future Comptroller Scott M. Stringer and Public Advocate Letitia James. I am immensely proud of her historic win! Now, we must focus our efforts to elect Bill de Blasio as the next Mayor of this incredible City. Thank you again to everyone who made my re-election and the county committee meeting such a huge success!

On September 17th, the New York County Democratic Committee held its 2013 Judicial Convention. We pride ourselves in selecting the most qualified and diverse judicial candidates. This year there were fourteen candidates for Supreme Court:

All judicial candidates go through by an independent screening panel comprised of bar associations and local civic and community organizations. The 2013 independent screen panel found all of the fourteen candidates to be highly qualified. This made the selection process difficult for our Judicial delegates, but the they selected Debra James, Anil Singh, and Peter Moulton. The New York County screening panel process has ensured that only qualified candidates with the right judicial philosophy are deemed appropriate for selection, and this successful group will prove the panel proud.

I would like to thank this year’s panel members and it’s administrator for their hard work and dedication. The nomination of members of the judiciary is one of the most important responsibilities of the County organization, and I take pride in the integrity of the process and will continue to ensure that the candidates are as diverse as our great city.

The following were approved by the Independent Judicial Screening Panel for consideration for the three (3) 1st Judicial District Supreme Court vacancies to be elected at the general election on November 5, 2013:

In addition to the above, the following candidates were previously qualified by Independent Judicial Screening Panels and remain eligible for consideration:

We extend our gratitude to the Panel and its Administrator, Tracee E. Davis, of Zeichner Ellman & Krause LLP, for their diligent work.

Invites you to attend the